The place where community and the arts meet!
​We are on a mission to put Rio Rancho, NM on the cultural arts map!
Scroll down to see what is happening now!
​

JULY 17, 2022 – Rio Rancho Creative Crossroads (RRCC) has decided that the time and conditions are right to hire their very first Executive Director. They have selected Aaron Howe, who served as the founding Artistic Director of the RRYC since 2013. Mr. Howe makes this transition from Artistic to Executive Director during a time of rapid growth and exciting opportunity for this Rio Rancho arts organization.

When the RRCC was founded back in 2013, it supported only one arts program - the Rio Rancho Youth Chorus, and that chorus started with only 9 singing members. Since that time, the RRYC has grown to over 30 singing youth, and the RRCC has taken on two more entities: the Squeaky Shoe Project and The Rio Rancho Players (a community theater group). And with an additional chorus on the horizon to add to this group, the RRCC Board decided that this growing community needed to hire someone to help direct the workflow of these programs, to support their needs, and to provide them the resources and guidance so that they might continue to grow and succeed in their artistic ventures.

The RRCC is very excited to welcome Aaron Howe into this new Executive Director position. Not only has Aaron served nine years as Artistic Director of the RRYC, he is also the current Artistic Director of the New Mexico Gay Men’s Chorus (since 2010) and Artistic Director of The Zia Singers in Santa Fe (since 2016). He is also the Chorus Master for Opera Southwest (since 2018). Aaron Howe brings many years of experience working with the arts in the community, including serving on the Board of Directors for Musical Theatre Southwest and teaching voice at the Albuquerque Academy Summer Program. Aaron transfers to his new duties as Executive Director as of July 1, 2022.

“Aaron was the natural choice for our first Executive Director. He has first-hand knowledge of our company and our programs, and he is deeply connected to the arts community all over Albuquerque and Rio Rancho. He shares our vision and dream for a vibrant arts community, and he has the personality and skills to make that dream a reality.” says Neal Shotwell, RRCC Board President.

The Rio Rancho Youth Chorus is thrilled to announce Colin Burdge as their new Artistic Director! The former director of the RRYC, Aaron Howe, has moved into the role of Executive Director of the umbrella non-profit Rio Rancho Creative Crossroads, after serving nine years as the founding Artistic Director. The RRYC looks forward with great enthusiasm to the leadership of Colin Burdge, a young director and performer of great skill and accomplishment!

Colin is extremely well known and respected in the local choral and theater community. His great talent and drive earned him a degree in Vocal Performance from Gonzaga University, and to many solo performances in NM with the New Mexico Symphony Chorus, the New Mexico Philharmonic Orchestra, and Opera Southwest. He also performs regularly with Polyphony Voices Of New Mexico. Colin has also served as the Assistant Director of the New Mexico Gay Men’s Chorus for the last 5 years, where he also directs the outreach ensemble of the NMGMC, the QTones. Colin has a vast array of experience performing challenging lead roles in community musicals, such as Company, Jekyll and Hyde, and Fun Home. He is also known for being a top notch music director, making his debut with Musical Theater Southwest’s production of Nine, and currently music directing two musicals at the same time: The Hunchback of Notre Dame and Carrie The Musical.

“Colin Burdge is one of the most talented and sought-after directors and performers around. I have had the privilege of working with him over the years, and I am continually astounded at the complexity of musical projects that he is able to master, and amazed at the high quality that he is able to bring out of a wide variety of performers. Any chorus or theater would be absolutely delighted to have Colin leading their music program, and the RRYC feels extremely fortunate and grateful that he will be joining us as Artistic Director. We are eagerly anticipating seeing and hearing what he will be able to accomplish with our enthusiastic singers,” says Aaron Howe, Executive Director of RRCC.
Want info about one of our programs?  Click the icon below to get info about each program or the "Learn More" button for info about Rio Rancho Creative Crossroads as a whole! 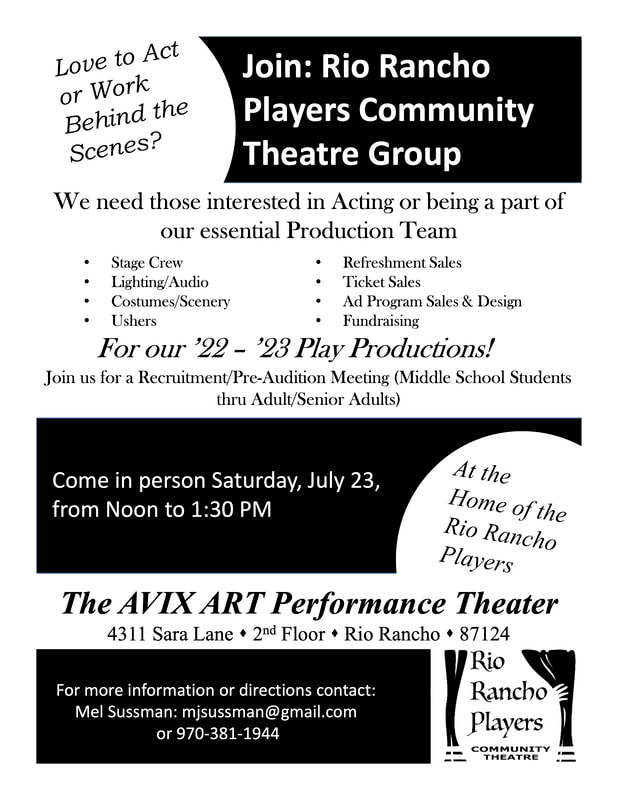 You are invited to audition for the Rio Rancho Players fall play:

Come  and be a part of the 2nd season of this growing and enthusiastic Theatre group!

Missed a performance? Check out our YouTube page to see lots of fantastic performances!
Special thanks to our Founding Supporters for believing in RRCC and making it possible for us to bring the idea to life.